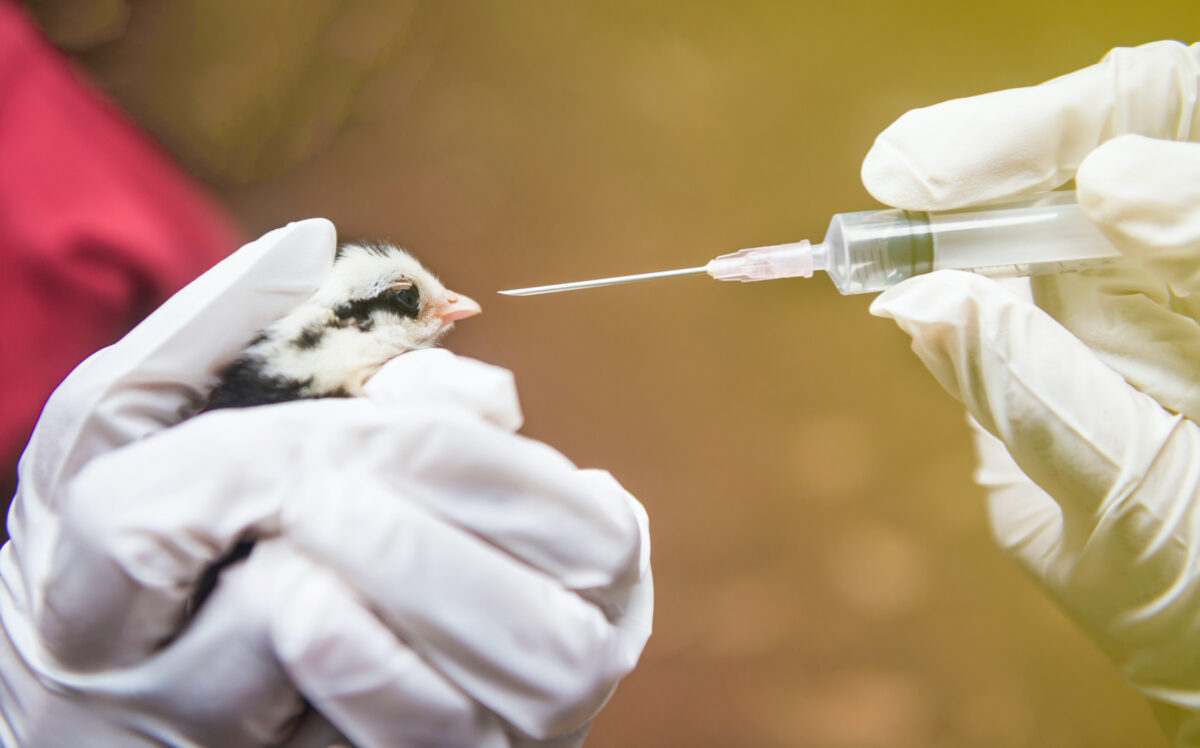 As U.S. Regulators Restrict Antibiotic Use, Livestock Farmers Turn to Vaccines, Hormones and Other Problematic Medications

Many people know about and oppose the routine use of antibiotics in animal husbandry. The drugs are profitable for meat producers because they cause animals to gain more weight on less feed and prevent the onset of disease in the often cramped conditions of concentrated animal feeding operations (CAFOS).

As the extent of antibiotic residues and antibiotic resistant bacteria in meat has been revealed, there has been a public backlash against the use of the drugs, leading some meat producers to label their products” raised without antibiotics. The problem is that consumers do not know that other drugs are now used in meat production and are not on the labels. Worse still, in an effort to reduce publicly rejected antibiotics, meat producers are turning to vaccines.

“Vaccines and other alternative products can help minimize the need for antibiotics by preventing and controlling infectious diseases in animal populations, and are critical to the future success of animal agriculture,” reads a 2018 article. in Veterinary Research.

In addition to vaccines for cattle, pigs and fish, food animals are also vaccinated in the form of embryos.

More than 90% of broiler chickens in the United States are vaccinated “in ovo,” according to a study published in Veterinary Research in 2018. This means they are vaccinated as embryos in the egg. Vaccines are either injected directly into the embryo or into the amniotic cavity of the egg. But like human vaccines, the technology has its risks.

The authors of the Veterinary Research study report that routine mass vaccination in the hatchery “is labor intensive, causes stress in the chicks, and high sanitary standards must be observed when preparing and injecting the vaccine to manage risk of infection”. Injecting vaccines at the wrong stage of embryonic development can be disastrous, they write, giving the example of 10- to 12-day-old embryos that were injected with turkey herpes virus too early and were developed lesions and died.

Are there residues of vaccines from poultry and other food animals in the meat? Maybe. Researchers writing in the Archives of Virology in 2011 advised that a “vaccine, especially if injected subcutaneously, should be introduced into an area of ​​the animal not used for human consumption, such as behind the animal’s ear or in the area of ​​the chest wall behind the elbow.” In this way, the researchers wrote, “if any residual vaccine remains or a reaction to it, there will be no involvement of an edible part of the carcass or loss of adornment in animals intended for ‘feed”.

Have you ever heard of estradiol-17, zeranol, trenbolone acetate and melengestrol acetate? Probably not, but these are hormones commonly used in American cattle for growth production.

Much of the European Union takes a dim view of these hormonal drugs. According to the EU Scientific Committee on Veterinary Measures relating to Public Health, “Misplaced [hormonal] implants and repeat implantations, which seem to occur frequently, represent a considerable risk that highly contaminated meats may enter the food chain.

The EU Scientific Committee also wrote that “the highest rates of breast cancer are observed in North America, where the consumption of hormone-treated meat is the highest in the world… Prostate cancer shows similar variations…[and] is comparable to that of breast cancer. These cancers are known to be hormone-dependent or hormone-mediated.

Scientists writing in the journal Anticancer Research say the hormone zeranol may “play a critical role in breast tumorigenesis” and “be a risk factor for breast cancer.”

Few people in the United States know that other countries reject American hormone beef. According to the Library of Congress, “The United States and the European Union (EU) have been engaged in a longstanding and acrimonious trade dispute over the EU’s decision to ban hormone-treated meat.” The disputes escalated when, in 2009, the US Trade Representative announced plans to raise tariffs on certain products. The EU claimed this constituted an “escalation” of the dispute.

As the UK prepared to leave the EU, wrote the London-based Food Research Collaboration, “there is a risk that food standards will be sacrificed to win trade deals with non-EU states such as than the United States. This report examines the case of beef treated with hormones, which is authorized in the United States, but which the EU refuses to import. The World Trade Organization has accepted the EU’s refusal to import beef raised on hormones. The report shows that at least one of the hormones commonly used in beef production in the United States has been found to pose a significant cancer risk by the EU.

China also restricts “beef from cattle implanted with growth hormones,” says the University of Minnesota Extension, a research and outreach partnership between the university and state, federal and county governments. The Extension defends drugs as promoting sustainability and as natural as the hormones found in plants.

In Taipei City, Taiwan, in 2007, 3,500 pig farmers gathered at the Ministry of Health and the Council of Agriculture to protest the possible lifting of the ban on ractopamine, Taiwan News reported. . Chanting “We refuse to eat pork containing toxic ractopamine” and “Get out, American pork,” protesters threw eggs at police, soldiers and reporters and pig dung at government buildings.

According to Temple Grandin, the renowned American scientist and animal behaviorist concerned with humane slaughter, “indiscriminate use of the beta-adrenergic agonist Paylean (ractopamine) has contributed to an increase in non-ambulatory pigs and pigs that” are extremely difficult to move and drive.

“All studies have shown that beta-agonists significantly increase muscle mass and loin surface area. The cost of this increased amount of meat is lower quality meat and adverse effects on animal welfare, unless beta-agonists are used very cautiously,” adds Temple.

A 2003 Journal of Animal Science article confirms that “ractopamine affects the behavior, heart rate, and catecholamine profile of finishing pigs and makes them harder to handle and potentially more susceptible to the stresses of handling and transportation” .

In Holsteins, ractopamine is known to cause hoof problems, Grandin says, and feedlot officials report that the “outer hoof casing fell off” on a related drug, zilpateral, marketed as by Zilmax.

Thanks to consumer pressure, some meat sellers are making their products without antibiotics. However, if they replace controversial drugs with vaccines, is that really any better? Additionally, the heavy use of hormones and off-label ractopamine should also be of concern to health-conscious food consumers.