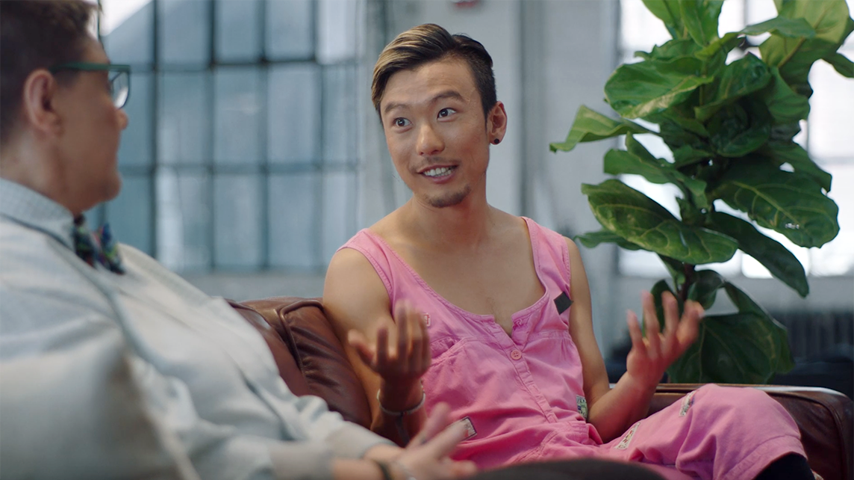 The LGBTQ community is often referred to as “family”, the connotation being that it is a tight-knit and supportive group of people. According to the researchers, however, the analogy is particularly striking when it comes to another less positive aspect of families: generational gaps. Over 60% of LGBTQ seniors report feeling an isolating lack of companionship; two in five feel disconnected from the young LGBTQ community. (This is especially true for survivors of the AIDS epidemic.)

In memory of the 50th anniversary of the Stonewall Uprising, filmmaker Ivan Cash brought together LGBTQ-identifying pairs of different ages to explore their similarities and differences. Her short documentary, a shorter version of which appears in Airbnb’s World Pride campaign, pairs older members of the community with younger ones. The conversations are intimate, revealing and sometimes difficult.

“There have been so many changes in this community that we were keen to bring community members together to discuss these different experiences and perspectives head-on,” Cash told me.

In the film, a pair struggles to forge a connection when the younger one introduces themselves as “he/him”. He asks the older woman about her pronouns, and she admits, troubled, that she doesn’t know what a pronoun is.

Another couple laments the existence of the chasm between them. “There is a lack of trust on the part of the older generation vis-à-vis the young”, explains the old woman. “We seem to believe there’s nothing we can tell you, because you’re not going to listen.”

“That gap took the conversation away,” says his younger counterpart. “It took away the part where we can actually get together and talk about issues in our community.”

Michael Adams, the CEO of SAGE, a research organization that advised Cash on the film, says younger and older LGBTQ generations are “disproportionately fractured.”

“Wisdom is no longer passed between generations,” adds Charlie Pitre Hoy-Ellis, a researcher on LGBTQ aging at the University of Utah. “The intergenerational gap divides the community.”

This discrepancy can be attributed to many factors, according to researchers Glenda M. Russell and Janis S. Bohan. Among them are “the radical disconnect between the lives of young LGBT people today and those of their elders when they were young, the pervasive age segregation within LGBT communities, the extreme speed of change which makes certainties tomorrow’s irrelevance today, and the very common… tendency of each generation to reject the perspective of the other.

As the conversations in the film progress, it is clear that participants benefit greatly from speaking up and listening to others. “I think every attendee experienced a change through these conversations,” Cash said.

Richard Haines, who participated in the documentary, told me that the experience was particularly moving for him. He was paired with a woman, Leah, who is his daughter’s age, and their discussion triggered a painful memory.

“My daughter is 22 and came out a few years ago,” he said. “But when she was younger she asked me if I was gay and I said yes. And for a while she kind of pulled away from me. It was kind of excruciating, and I wondered, What if she doesn’t love me? In my generation, growing up gay was tied to a self-loathing – that if we say who we are, we will be less liked.

Haines also appeared in clips from the branded version of the film, which Airbnb promoted throughout New York City. “On a personal level, to go from growing up locked up to my face on bus shelter kiosks as a gay man…it’s pretty extraordinary,” he said. “It sounds corny, but it’s an honor to be that person – to have that opportunity.”

As for the generation gap, “it’s a challenge,” he says. “It’s an ongoing conversation that needs to [continue] after pride month.

We want to know what you think of this article. Submit a letter to the editor or write to [email protected]