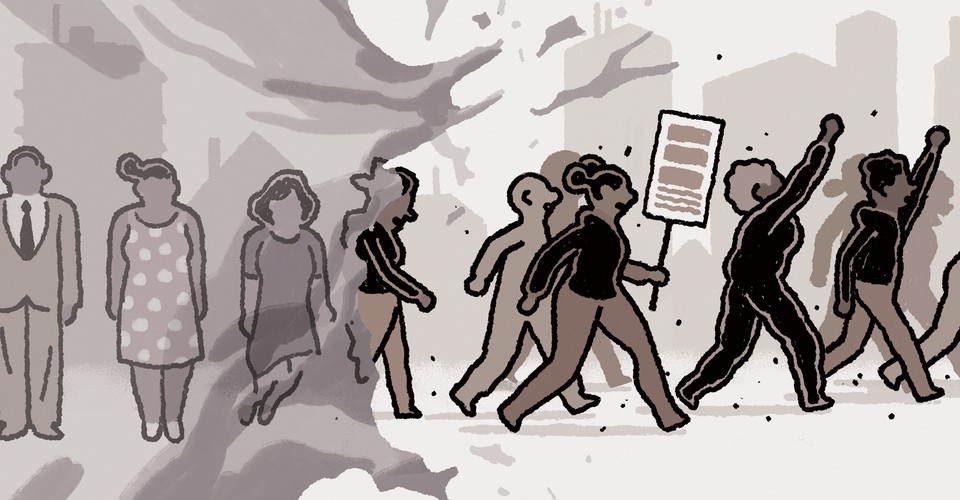 The reverend’s voice on the phone was deep and deliberate. He was trying to dissuade us from heading to the Florida Statehouse, where a massive sit-in had been staged by young activists to protest the murder of black teenager Trayvon Martin and the acquittal of his killer, George Zimmerman . The protesters, with their zeal and style – their use of social media, their graphics and videos, their hoodies – have won over our group of politically engaged African Americans in North Carolina. I was 28 and we felt that the older, more established civil rights organizations weren’t showing enough urgency right now. We had packed up, ready to drive south, but the Reverend had phoned at the last minute and urged us not to go. Now we sat huddled around the phone at my friend’s kitchen table.

“It is Absolutely a King-Stokely situation! said my friend’s father abruptly, a few meters away from him. He and the Reverend alluded to a turning point in the late 1960s, when Stokely Carmichael, the young leader of the Student Nonviolent Coordinating Committee, issued a philosophical – and generational – challenge to Martin Luther King Jr.’s belief in nonviolence. -violence as a tactic and in racial integration as a primary objective; out of this conflict was born the Black Power movement. A seasoned activist, my friend’s father wanted us to understand that our disagreement with the Reverend reflected a long history of intergenerational tensions among civil rights activists. It was in July 2013; more than four years after the election of the first black president, the national mood had changed. Instead of debating the notion of a “post-racial America,” we were grappling with the aftermath of a modern-day lynching. Two generations earlier, in 1955, a black Chicago teenager named Emmett Till was lynched while visiting relatives in Mississippi, a case that shocked the world and energized the nascent civil rights movement. Trayvon’s murder would also spark a movement, although all we knew at the time was that this moment mattered.

A week before that phone call, my friends and I had been arrested for staging a sit-in at the North Carolina Capitol to protest legislation clearly designed to suppress black voters. In volunteering to be arrested, we had followed the example of the Reverend, William J. Barber II, who had been organizing protests at the Statehouse in Raleigh for several months. Tonight, however, we had come to an impasse. My friends and I ultimately chose to travel to Florida because we believed in the need for a youth-led movement. After all, it is primarily black and Latino youth who have been targeted and killed by the criminal justice system.

Tensions between generations of civil rights activists have largely centered on a debate over tactics. A hallmark of the modern movement has been an open rejection of the “politics of respectability” – the notion that black Americans must show themselves “respectable” to gain equal rights. Iconic images from the 1960s show young people dressed in their finery as they are bitten by police dogs or knocked out by fire hoses. The day before our demonstration in Raleigh, the Reverend reminded us of this tradition and encouraged us to maintain it. But some of my colleagues have raised a question: Wasn’t Martin Luther King Jr. assassinated while wearing a suit? The idea that changing our clothes would change our circumstances was unsettling. Many experts have suggested that Trayvon was killed not because of racism but because he was wearing a hoodie. So wearing t-shirts, jeans and hoodies at protests became an intentional act of rejecting “respectability,” instead of trying to look rich and white.

An element of class conflict in the movement has grown in recent years. Middle- and upper-class black Americans have arguably benefited the most from civil rights and black power. From the late 1960s through the 1990s, black Americans gained access to previously prohibited jobs in government, academia, and the professions. A black political class has risen in cities like Atlanta, Baltimore and Washington, DC. At the same time, the War on Drugs, the Crime Act of 1994 and mass incarceration have disproportionately harmed poor black people.

One of the earliest objections to the Black Lives Matter movement was that, unlike traditional civil rights organizations, it was “leaderless.” This view reflects a certain sexism, overlooking the many black women who have spearheaded the movement since its inception. But yes, the leaders of the movement made a deliberate effort to decentralize power. It is largely a response to the harsh reality that former black leaders – King, Malcolm X, Fred Hampton – have been targeted and killed, leaving their movements in turmoil. Last summer, a report by the FBI’s Counterterrorism Division alleged the rise of “black identity extremists,” a previously unknown category. The report recalls that of the agency cointelpro program that undermined black activists, including King, in the 1960s.

Political movements, by their nature, are messy and nuanced. King, who was in his thirties when he led the civil rights movement, often found himself torn between his younger and older factions. Institutions such as the NAACP generally view the courtroom and halls of government as the most important battlegrounds in the fight for equality, while student movements seek to empower communities through nonviolent direct action. . More recently, these grassroots activists have organized fast-food workers to “fight for $15” as the minimum hourly wage and have encouraged protests on college campuses to raise the pay of adjunct professors.

Then, as now, being arrested, imprisoned, or associated with crime in any way, whether in a hoodie or a suit and tie, was bound to upset the political establishment. When Black Lives Matter activists blocked traffic and engaged in other acts of mass civil disobedience, many white liberals and older black activists claimed King would not have approved of the kind of disruption caused. by these events. While King and Rosa Parks are now celebrated for their acts of defiance, their protests were no less controversial at the time, even within the civil rights movement.

The long-term vision is important. Generations need to dialogue. Elders who once fought to get into schools must listen to young people who are now struggling against the forces that take them from classrooms to prisons. The younger generation needs to understand how the modern movement builds on all the black liberation efforts that came before it. The night my friends and I headed to Florida we were at an impasse with the Reverend, but two years later when I scaled a 30-foot flag pole on the grounds of the Statehouse in Carolina South and removed the Confederate flag, he issued a public statement of Support.

In my current work as a community organizer in North Carolina, fellow activists and I operate on a principle we call “seven generations.” The concept, which we adapted from the Iroquois Confederacy, means we understand that the work we do has lasted seven generations and will continue for seven more. The movement lives thanks to the many people, places and generations that give it life.

This article appears in the print edition of the special issue of MLK with the title “The Movement’s Generation Gap”.