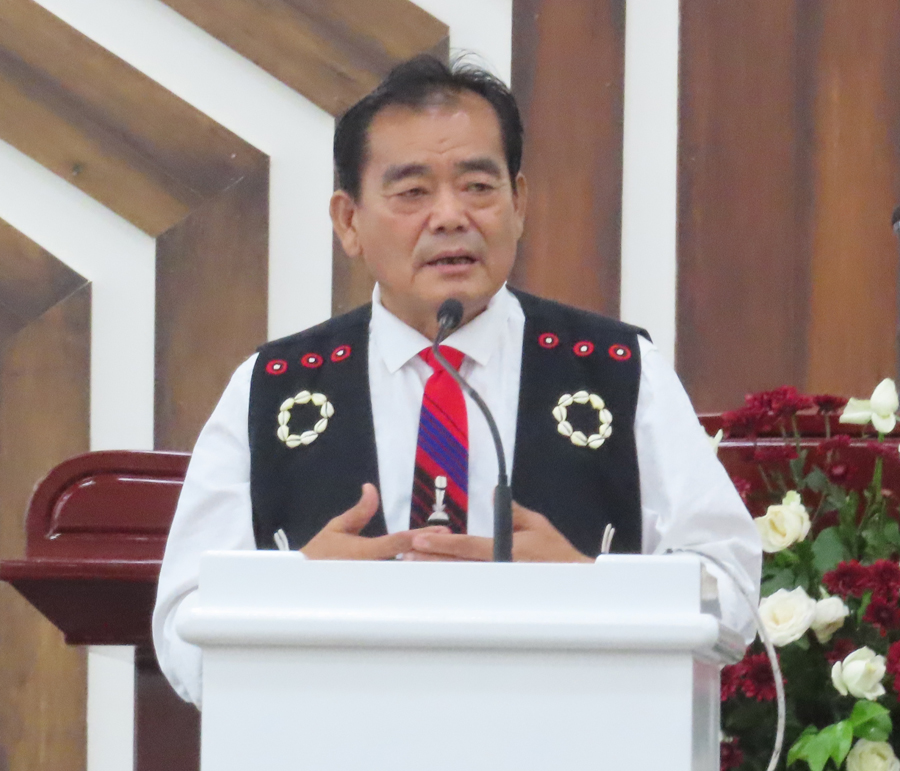 The main guest of the event, S Yangng Angh, OSD to the Minister of Health and Family Welfare, implored the gathering to stick together, saying there are greater things to be achieved as a community .

He also urged the Phom community to place their trust in God for peace, harmony and prosperity in all aspects of life.

The Phom Kohima Students’ Union (PSUK) anthem was also launched at the event, while a song was also featured by Langto Loyang.

The Minister of Health calls for unity and love

Addressing the gathering during the Phom Day celebration in Longleng, Minister of Health and Family Welfare, S Pangnyu Phom commended the pioneers for stepping up and taking the unanimous decision to quit the culture of headhunting, avoiding violence, and proclaiming “peaceful existence and calm surroundings” during the darkest period of Phom’s history.

He said that the unconditional sacrifice and devoted heart given to the most dangerous mission by the ancestors in the late 1940s and 1950s enabled the people to see the light of darkness, where each individual is capable of passing the ” message”. of peace and harmony” in the four corners of the world.

“The fearless, brave and wisest ancients of those days are the real heroes, even to this day,” he said.

The Minister affirmed that the current generation and future generations must continue to maintain the spirit of unity, belonging and above all love between them in all areas of life; motivate and inspire through this day – Phom Day – to make “our earth a better place to live”.

He recalled the past in which Phom society was shrouded in fear and insecurity, glorifying murder and praising inhumanity, while neighboring communities excelled and progressed in embracing Christianity, education and transforming the standard of life. While maintaining that there had been massive growth and scaling in every area after June 6, 1952, he said the current generation was “lucky”.

Highlighting the divided Naga society, the Minister called on the “Phom Day Commission” to spearhead the formulation of a holistic strategy to educate people to get along and find an amicable solution to the fractured Naga society.

“The day has come for our people to play an important role in launching a peace process mission by citing Phom Day as a living example (the historic consensus agreement) that has enabled us to see a better world and above all to emulate unity and victory in our country called Phom,” he said.

“Holding this mission in our hearts, let us all become a channel of blessings for all our fellow Nagas and share everyone’s contribution for a productive and flourishing society,” he added.

He also called, encouraged and challenged young intellectuals and the student community to come forward and research Phom Day and establish the land as a “Peace Research Center” institution for the state and the -of the.